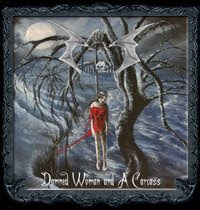 Dark End are six-piece untipical black metal band whose carrear dated back from the end of 2005 year. After some line-up consolidations, they started to prepare a materials for debut album, whose realization looked the light of day in previous 2007 year. Even that we can face it with facts that black metal as a genre drowned in deep crises, listening a Dark End album comes to mind that Italian fellows haven' t a mentioned sort of problem. A band had offered own views
of symphonic black metal influental equally by the newer and older school. A special interesting thing comes to lyrical approach. A complete materials except one song - " Love Will Tear Us
Apart " , penned by Joy Division, are taken from the Baudelaire's books - "Le Fleur du Mal" and "Spleen" .
So, Italians hardly tried to sound realisticly and convinceble, and their album mostly confirms that statement. Some of offering songs are done in mid-up tempo, some are more atmospheric,
other are furious and faster. Finally, we have here one intereting issue, recomandable for black metal followers.