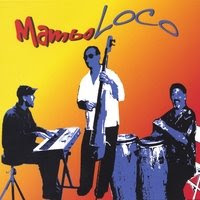 Locate on Long Island's East End, Mambo Loco are band active on so call latin scene in their area. Consists of well-known and established performers and professionals, they are facing with latin challenges, and certainly all the job's they did with respectable approach. A music on their S/t album band mostly dedicate to the latin classics which originated in Cuba and Puerto Rico during the golden period between 1940's to 1960's.As a skillfull musicians complete materials a group played with elegant style. Some of the materials posses jazzy flavour and acters didn' t hesitate to include themselves in improvizations. Arrangments are threthed in expecting way, and we can also say that production can communicate with the standards of our time.
Mambo Loco CD contains of 8 listenable tracks, and little more than 36 minutes of music. Their CD you can buy directly form band or from largest indie web store CD Baby