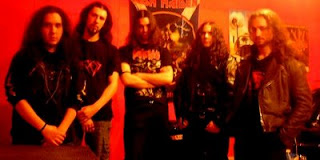 I have received a promo CD-R from Italian act Hatred, whose drummer Valentz also perform in band Dark End. Hatred offers a quite diifferent musical option than mentioned Dark End, and their style can be described as a sort of death/thrash metal. The hiatus of band was created in 2001-year, and in 2006, they release a 4 track Demo material. "Live 2007..." with 6 tracks in, introduced them as a death/thrash band mostly influental by the older school, comes out from the 90's period. Even that exists more influences in their sound, a best part of their approach belongs to performing energy, so they have sounded quite furiously "alive". I couldn' t add that band members are technically well-trained, but evident enthusiasm and mentioned energy took the best part of them. Not so original, but vividly ready to taste their possibilities in contact with audience...