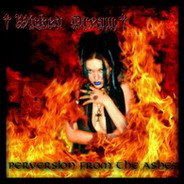 Out of Termoli, comes act Wicked Dream, founded in 2003 year. A basic inspiration for its name, was Black Sabbath song "Wicked World". In 2004. they released a S/t demo with 5 tracks in, and during the previous year an actuelle full-length. They suffered of some personal changes, but we can confirms, that domestic underground metal community knows as well about the band.
Wicked Dream performs variant of heavy/thrash metal with clear death includings. They are pretty infected by the 90's period, but judging by instrumental performings ( not in vocal threathenings ) its sound also knows to associate on 80's legacies. "Perversion From The Ashes" are consists of equally standardized materials, but also its offering didn' t show technically skillness or convincebles of members from band - but finally they sounded according to its wishes. A productional work is monotonously threathed, and all of 8 present songs, sounds similiar among them. "Perversion From The Ashes", with 25 minutes of music, isn' t a album
whose materials will be specially remembered, but a band has offered some potentials at last.