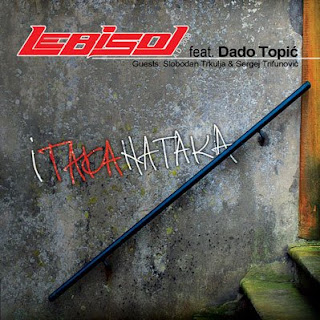 Leb i Sol are active again with new studio album. Actuelle issue looked the light of day some days ago, and are done by two original members, bass player Bodan Arsovski i keyborder Koki Dimusevski.. Guitarist, leader and frontman Vlatko Stefanovski didn' t want to participate in actuelle reunion phase, and the same situation stay with original drummer Garabet Tavitjan. Probably, the best Macedonian band ever, is one of rarest who can not face it with so call authors problem. As we know, Dimusevski and Arsovski are skillful composers and they confirmed own capabilities in older Leb I Sol albums, as same as in their solo efforts, released during the last 18 years. It's also in my opinion important to mention, that carrear of Bodan Arsovski before and
after of realization of masterpiece " Endless View" had respectable international taste.
A new line-up are consists of band members old friend and collaborators - guitarist Dimitar
Bozikov, and Belgrade drummer Srdjan Dunkic wanted studio and seshn worker in last few years. But, surely most interesting place belongs to Dado Topic, who has taken a vocal rolas, and certainly intrigueted media personals. A several interesting quests participate on album too, among others Slobodan Trkulja and well-known actor Sergej Trifunovic.
"Itakanataka" is an expecting album done in the Arsovski and Dimusevski kitchen. A band
mostly follow-up the tradition seen on their oldest albums realizations, and I' m not surprised at all. There are still present one eclectic combination of fusion, jazz-rock/world music elements, with expecting ethno flavours.There's no doubt that Dado Topic perfectly done the interpretation of "Si zaljubiv edno mome", a song supported by actuelle video clip.
All technical details are done professionally and refined, and members from band one more time here showed their huge experience. "Itakanataka" is an album with 9 tracks in, and band's die hard fans can be satisfied also, cos' the instrumental tracks are taken the biggest part of complete materials.
Musically, "Itakanataka" without Stefanovski in my opinion is one of the better Leb I Sol album in group's complete carrear. Leb I Sol are in the saddle again, and we'll see what the future brings...