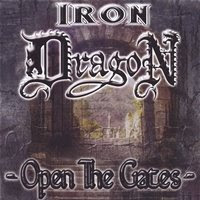 Iron Dragon is a Canadian band/project, brainchild of guitarist/author Ryan Crouse. He is also a owner and creator of "STAR VERSE" comics. With friend and bassist Sam Derkatch he has recorded an album "Open The Gates". This is his second effort, this time done as a fully instrumental album.
In some way "Open The Gates", is a sort of epic story/saga, where whole concept has promoted Ryan's interesting performing fields.But, this isn't a typical or classical guitar orientired metal issue. As a guitarist, Ryan didn' t show elements of virtuosity, but conceptually his album is full of often tempo or mood changes, as same as atmospheric or emotional diversities. We can not find well-known and established maniristical elements on his album, and all present things sounds also as a sort of musical experiment.It's also evident that "Open The Gates" accepts progressive influences, even that technically/productionally a present themes are poorly done. There are 11 tracks on album, and we can also threats them as a connective parts.
Finally, we can face it with interesting challenge, whose realizations deserve a listeners attention.