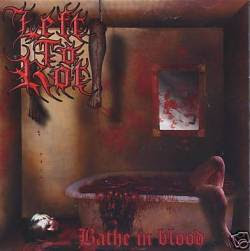 A New Mexico horde Left To Rot started its carrear in 2004 year. During the period of existence
their line-up suffered from some personal changes, but gig activities has announced a band's presence on underground circuit in its area.
"Bathe In Blood" is its actuelle album, where we can find an uncompromised portion of brutality and sickness. Death with grind elements, similiar to psychology of older scholl and nearer to legacy of groups as a : Suffocation, Cannibal Corpse, Morbid Angel, are present on 22 minutes of album. Practically, all things are clear after listening of just few tacts, and same atmosphere has followed through complete songs materials. Left To Rot play with constant passion and energy, growl vocalizations are also fullfield with screaming additionals, and only production is more orientire to 90's period, than to nowadays options. Fans of extreme and brutal metal tendencies will be "pleased" with "Bathe In Blood" album.