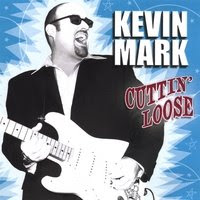 A previous year certainly was the period of confirmation of Kevin Mark status on blues area. His album "Cuttin' Loose" was another sucessfull product after "Rolling The Dice" from 2004 year. A guitarist, shouter and songwriter with his friends and collaborators has offered on album 14 tunes, where 11 belongs to authors work. Kevin's musical offering are consists of hard driven blues timelly located in different periods, and different performing backgrounds dominates through his authors legacy. He simply has standardized own style, which is combination of 50's blues, 80's rhythm and blues, swing, 70's rockabilly and many in-betweens. He also has offered a specific joy and positive vibrations, and practically all of present tunes posses mentioned mood.
"Cuttin' Lose" is a simply masterpiece, recomandable also for non-blues followers.