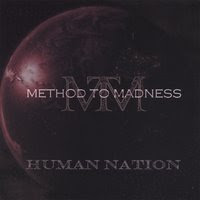 Out of Sanford, North Carolina. comes act Method To Madness. They work as a trio, and in own production have released a some period ago album entitled "Human Nation" Musically, MTM covers rock and progressive rock elements with strong hard includings.Some influences comes out from the legacies of acts such as a Rush or Kings X, and also are evident traces of 70's period. MTM didn' t offer technical supremacy as a case is with many genre's similiar acts, but its vision more effort gives to authors creativities.Their songs were done mostly in mid to mid-up tempo, and one "coolie" atmosphere dominates through album materials in general. There are also many unexpecting performing transformations, as same as acoustic additionals, and mentioned elements make comparizitions with Canadian legendsRush more realistically.It seems that production, a band has threathed in one so call "old fashioned" way, but that was their choice. "Human Nation" as a album, isn' t easy to acceptable on first listening, and also a band has offered a specific mood with its songs. Even that "Human Nation", isn' t a superior issue, offering materials describes band's visions and shows clear potentials.