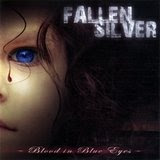 There's no doubt that Aussie rockers Fallen Silver as a band posses many qualities, and its performing stylish option offers enough attractive moments, judging by musical traces from debut "Blood In Blues Eyes". Unfortunatelly, a band is placed in actualle millenium, where quiet different regulativities exist in nowadays worldwide scene, than the case was, in for example 80's period.
It's important to mention, cos' band's offering belongs mostly to hard rock/pub rock/boogie tendencies, similiar to legacies such as acts as a : Rose Tatto, The Angels, and finally "softier" AC/DC . A band definitive reminds me on earliest Rose Tattoo, and its 80's sound invasion, but Fallen Silver's offering also has accepted some other evident elements, as a melodicity as a primar quality. 80's flavour in its sound is practically present on whole album materials, and most of songs also posses radio acceptables. Fallen Silver are convinceble in its vision and album materials deserves positive reactions, but 80's tendencies and retro approach surelly has amortized offering creativities.