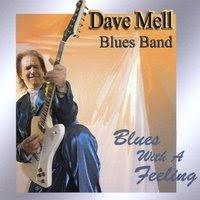 Dave Mell is well-experienced guitarist and musician from Eastern PA area. He has been playing
since 1972 year, and his performing and discographical activities has included collaboration with many collegues/performers. He toured a loot, and also few times in Ukraine among others.
He has recorded a several albums, 2 with his Blues Band, and also 2 DVD's. Actuelle one "Blues
With A Feeling"introduce himself and his collaborators in one optimistic and absolute positive mood . There are 18 tracks on album, duration over a 70 minutes. Even that we can find mainly covers on album ( 2 of them are authors creations ), Dave and his band has offered a respectable portion of well-played blues/rhythm and blues songs, done with evident refine style and 50's flavours. Many classic rock elements as same as swing and even jive/earliest rock and roll details are present in album. Practically all of offering songs posses different atmosphere, but we can't find here and there any boring moments/places. I suppose that concert atmosphere should be a real place to facing with Dave Mell Blues Band's musical offering, but a second album of his band is also a recomandable product. Don' t hesitate and grab your copy from CD Baby, or from band's site.