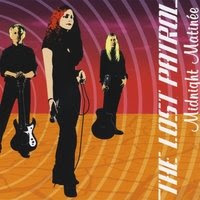 The Lost Patrol is three piece band, and its activities dated back from the end of the 90's. They comes out from Piermont, New York, and its carrear is also discographically relevant. A band has released till now a 7 issues.A last one, "Midnight Matinee", band did with own forces, as a self-financed album. In formation, a group has a new singer, and this is charismatic Mollie Israel. She replaced a previous vocalist, after realization of "Launch And Landing" album.
The Lost Patrol is pretty original and unique act. Its stylish option comphrise many interesting variants as a : surf, 60's psychedelia, indie pop, 60's beat, and many interesting traces in-between. A songs posses dreamy/catchy atmosphere, where one specific so call retro approach is present here and there. Some associations leads to Morricone film music, 60's beat and psychedelia , but also some comparabilities cover legacies of acts as a :Echo & The Bunnymen , Lush, Ride, The Chameleons...There are 10 tracks on album, duration of little less then 37 minutes, but band payed attention on every possible detail/place on album.
"Midnight Matinee" is also very inspirative and in some way optimistic issue. I have to add that in nowadays scene The Lost Patrol takes a specific place and position.