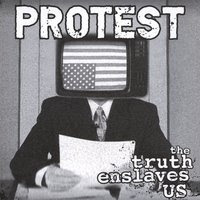 Out of Dallas, TX comes band Protest, formed back in December 2003. They work in quintet formation, and in October 2006, they have released with own forces an EP,entitled "The Truth Enslaves Us". A 2 years later, "The Path Less Traveled Records" staff decide to join forces with the band, and now group works under the label promotionals circuit.
A band's musical offering is some sort of agressive/brutal thrash metal "locate" somewhere at the end of the 80's and the begining of the 90's period, fullfield with strong hardcore elements. A 5 present songs are done with strong backing performings and relevant screaming and agressive
vocalizations. A production is also nearer to 90's psychology than to nowadays standards.
Protest has performed own materials in convinceble way, but unfortunatelly with lack of originality. That's the key problem, all other things band did in expectingly relevant way.

Labels: PROTEST - The Truth Enslaves Us