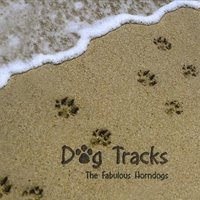 For all fans of New Orleans rhythm and blues tendencies, a CD's of Fabulous Horndogs could be a rare gem and real gift.They hails from Michigan, and in mentioned area, they are a premiere dance and party band. Its line-up are consists of well-experienced and well-trained musicians, and that's clear after listenings of just few tacts from actuelle album. "Dog Tracks" are consists of mainly well-known covers, but The Fabulous Horndogs performs them with pretty tasteful feeling, dinamization and style. "Dog Tracks" comprise blues and rhythm and blues tracks, arranged with funky flavour, where saxophone and trombone "dictates" a specific mood. "Red Beans", Funky Kid", "Drinking Tanqueray", "Cease And Desist" are some of the band's offering songs which surelly as others deserves constant replaying in your sound system. Surelly, the best possible way to communicate with band is a club atmosphere, but "Dog Tracks" also has offered enough representative moments.