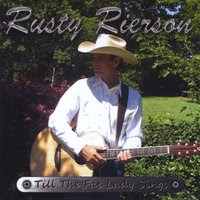 A some period ago, I have received a CD from young fellow Rusty Rierson. He is also a newer name on constantly growing country market, and he has also recorded a debut album entitled "Till The Fat Lady Sings".
"Till The Fat Lady Sings" are consists of 12 melodic tunes, where half of them has penned by Rusty himself. He has offered one very acceptable combination of old fashioned style mixing with modern production and some popy includings. Under the mentioned variations he offered own vision, where many comparabilities could exists, but at last that changed practically nothing. One generally pleasent atmosphere dominates through complete album materials, and I woould specially recomand a s/t track "Till The Fat Lady Sings", as same as ballad "Angel Of My Heart". Rusty posses a pleasent voice, and most of his songs are acceptable for radio editing. "Till The Fat Lady Sings" finally offers a fine materials, and generally Rusty's debut could be a good discographical start for him.