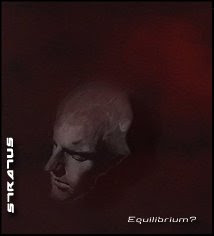 A Jagodina based band Stratus is well-known outfit on Serbian metal market.
They are active a some years ago, and during the period of existence, they have released a two full-lengths.A first album dated back from 2005 year, and actuelle one looked the light a day at the end of previous 2008 year. A band has new label and new line-up, and some stylish differences between actuelle and first album.
Musically,"Equilibrium?" is more orientire to prog. metal tendencies of older school, I would add with archaic traces and realizations.
A weak production, boring vocal harmonizations, and similiar arrangments threathenings are present practically on complete album materials, so complete impression is realistically sad. Only part-time interesting instrumental dualities sustain listener's attention, but uninnovative lirical approach also has showed a lack of creativities. After "Equilibrium?" a positions and status of Jagodina outfit certainly will fall in domestic area.