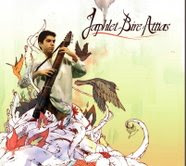 A newer name on world music therithory is young performer Japhlet Bire Attias. After playing the guitar for some period, he decided to "change" direction and face his performing capabilities with 10-string Chapman Stick instrument. With some well-educated and established musicians, he has recorded a materials for debut album, entitled simply "JBA". He is well-performer, refine author, arranger, and his musial offering touches many interesting fields as a: world music, progressive, jazz, fusion, and some other things in-between. Complete present materials were done in specific mood, and one general pleasent atmosphere is evident . With his collaborators, Japhlet has also offered some known compositions/covers, and I would add that versions of tracks as a : "Senor Mouse" ( Return To Forever ), "Trilogy" ( Emerson, Lake & Palmer ), or "Islands, Islas,Iles ( King Crimson ) are really unique and unrepeateble. In some places, a mentioned atmosphere which artists has reflected on album, reminds me on some earliest works of Pete Metheny/Lyle Mays fame. But, that comparazitions doesn' t change complete picture of present ideas/musics, which JBA and his friends has created. As Japhlet told me, soonly he will visit Bosnia, and he is hoping to play there. If you have a possible chance to facing with his music, don' t hesitate and come up to see him and his band.