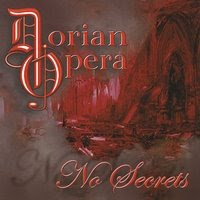 A German act Dorian Opera was formed in May, 2007 year. A band are comprised of well-experienced musicians, also professionals who performed together in many previous groups/occasionals. They work as a quartet, and main intention of its offering views is some sort of equalizations of classical and rock messages. A group has in its line-up skillful performers and two composers - guitarist Oliver Weislogel and keyborder Andrew Roussak. They offered in actuelle debut "No Secrets" a portion of progressive/progressive rock visions, fullfield with prog. metal elements.
We can find in its approach influences comes out from 90's period, and from British acts legacies too, but clever performings, and also wise arrangments creations, shows that Dorian Opera posses many other own qualities.
A production is also modern, and in some places each of offering songs has many exceptional moments, also comparabile with some classical or 70's progressive un(known) themes. Dorian Opera is a certain act, with strong attitudes and statements.