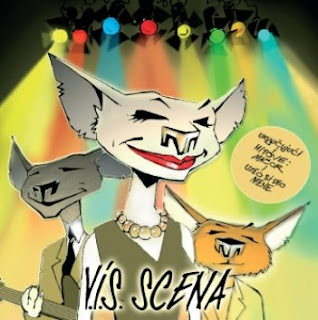 A few months before, a Majdanpek based band Vis Scena has released a S/t album for Montenegrinian label "Goraton". Vis Scena aren't a new name on domestic ( Serbian ) scene, but its carrear passed in many years of inactivities. During the 90's they have released a only cassete tape issue for "Take It Or Leave It" records, a few years before they have also recorded another ( second ) album, but as I saw from band's site, they never pressed mentioned offering. Actuelle one, is judging by members from band promotional activities very "serious" project, and we'll see what the future brings.
Musically, a band is on therithory of mainstream pop, fullfield with clear jazz-pop and even soul-pop traces. In many musical pictures, as same as assosiations, its songs reminds me on legacies of 2 groups - Belgrade act Bel Tempo active on late 80's and begining of the 90's period and Croation act - JINX. A mentioned similiarities are evident, but Vis Scena hardly tried to offer own vision and views. A songs from album are listenable and acceptable for radio usings. Nothing especially more and important were done in present 11 tracks, but it seems that band did what they want. I' m not sure that occasionals and surroundings in former Yu scene are going in same line with band's today's wishes, and in my opinion , their album could be more acceptable for the standards, relativities and relations from 90's period. Even of that, a followers of retro jazzy/soul pop tendencies can pay attention on band's music and forthcoming activities.