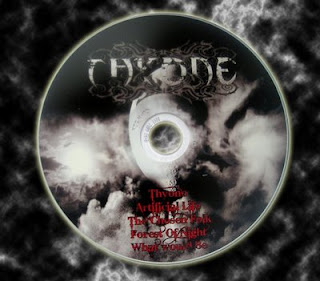 A German act Thyone is a newer name on national underground metal market.
They have founded in 2005 year, works in quartet formation, and during the years of existence they had some personal changes. A few months ago they have recorded a Demo with 5 tracks in.
Thyone plays , I would say untipical variant of melodic/progressive death metal, fullfield with also classic heavy traces. Musically, and judging by its arrangments threathenings they are more on progressive than death therithory, where also one important thing exist in its performings, and that's are vocalizations parts. A vocal segments mostly aren't done as a growl variants, or exists in so call "softier" growl options, and we can find mainly screaming and "normal" singings options. 2 of 5 offering tracks - "The Chosen Folk" and "Forest Of Night" seriously has showed a band's arrangments potentials and progressive tendencies. But, the same situation doesn' t exists on other parts of its Demo.
I would also add that productional work is weak on most places of its Demo, and some corrections band surelly have to offer in future and forthcoming issues.