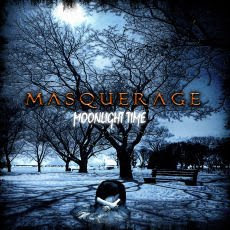 A Finnish Masquerage is a five-piece act, active some period on domestic scene. Till now, they have released a 5 Demos, 2 full-lengths and 1 DVD.
This is really impressive discography, if we have in mind that practically all promotional things band releases with own forces. They have in formation a singer/frontman Kimmo Peramaki, known for his former activities with group Celesty, but all other members posses respectable musical/performing knowledges too.
"Moonlight Time" has introduced themselves as a prominent melodic/heavy act with clear power metal and even hard rock includings. Technically also all other things funkcionize as well, and I will also add that band had offered an interesting artwork cover of CD's , with 12 pages colour booklet.
There are 9 tracks on album, I couldn' t mention any specific or special one as a potential hittish track, but generally a group has offered equalizing material and general clear conception. I beleive that band deserve a wider attention, especially of some relevant record company, so we'll see what the future brings.