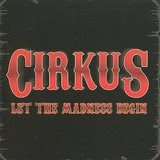 Swedish act Circus is active a couple of years, and till now they have released a 3 EP's and actuelle full-length from previous year.
"Let The Madness Begin" has introduced them as a serious sleaze/glam/hard rock act with strong attitude, with well-performings capabilities, and as a band with a clear message. Their sound is not polished or refine, and a production were done in more rawness way, but at the same time its songs posses pretty melodic dimension. On the other hand, a band has sounded as as well-trained team, and its materials didn' t fail in so call wrong direction. Influences comes out from the 80's period, and I would add that specially a production knows to remind on Motley's Crue first album methods of sounds threathenings.There are 9 tracks on album, and closing one is a cover of Bolan/T. Rex classic "Get It On". "Let The Madness Begin" comphrises a listenable and well released portion of sleaze/glam tunes, recomandable not only for glam freaks.