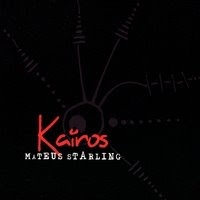 A Brazilian artist Mateus Starling could be a new important name on modern jazz scene. He is guitarist,still young, but with intensive carrear behind. He started as a guitarist, influental by the rock music, and his first professional steps, he did with many local artists and bands.
Later on, he played with band Karambah, and received a respectable national status as a musician. He was also active on national gospel scene, but a new begining started for him, getting scholarship to study at famous Barklee Collage in 2005. During the second part of the
2008, with his collaborators, he recorded a material for actuelle album. And in January 2009, "Kairos" looked the light of day.
Mateus is a convinceble performer and his technique touches many so call jazz fields. He has a special "ear" for timing and atmosphere, and "Kairos" as a album mostly communicate with one modern fusion/jazz-rock option. There are 8 instrumental themes on album, full of constant up-tempo challengies, and often dialogues between guitar and saxophone. Even that some of reviewers could find some comparabilities in Mateus approach with composing and performing methods of Scofield, Zorn or McLaughlin, brazilian guitarist has showed enough newer tendencies in his way of thinking and playing. Finally, "Kairos" is a very modern fusion/jazz album, worth listeners attention.

I love this guys playing and improvisational style... straight from the heart.