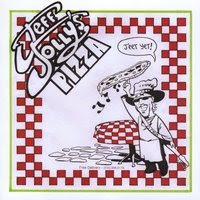 Jeff Jolly is a singer/songwriter with a respectable and longest carrear behind. With actuelle one, he has released 4 albums, performed to crowds of 60 000, toured Europe, and played in every more or less important corner of the world. "Jeff Jolly's Pizza", his fourth efforth, he has released with the band in September , previous 2008 year. Jeff's musical offering mainly communicate with roots based music. His authors work is also influental by the 70's period, and present materials from album also posses a classic rock, country, americana pastiche and views. In each part of offering songs/tunes he has showed that as a author has a respectable knowledge, and all of his creations has also a colourful arrangments threathenings. Some comparabilities also leads to I suppose one of his favourable band - Little Feat, but mentioned detail only explains in better way Jef'f's musical system of valuabilities. "Jeff Jolly's Pizza" is a fine album rich of brilliant places.