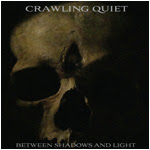 Crawling Quiet started as a Mark Trudeau studio project in 2004 year. He is a Toronto, Ontario based musician, and with his Crawling Quiet band he has released with newer one, a 3 albums. "Between Shadows And Light", actuelle offering comphrises a different metal genres/stylish
includings. With his collaborators, Mark has created one sort of dark/melodic metal album, but also with doomy/noise, and even folkie includings as well. In some places, a strange and unexpecting soundscapes punching through songs, where different arrangments traces are constant detail.A different atmosphere also varies through materials and generally songs are different among them. In my opinion, "Between Shadows And Light" sustain a more interesting, but also and less convinceble moments. Luckily, Mark has showed that his musical offerings posses elements of originality, and that's always an important quality.