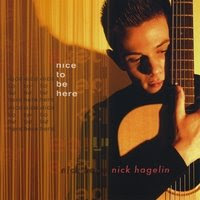 Nick Hagelin is songwriter, professional dancer, film actor, and also a producer of hip-hop, r'n'b and pop music. "Nice To Be Here" is his first solo offering, where he has introduced himself as a singer and author, who prefers to speak about love, life and other emotional statements. His songs are mainly half-ballads, or rather posses a easiest or coolie atmosphere. He is a singer with pretty pleasent voice, and his materials mostly cover pop/soul elements, influental also by the 80's period. A similiar atmosphere characterize album in general, and practically all things are clear, after listenings of just few songs. Nevertheless, followers of white soul, r'n' b and pop, can find something tasteful in Nick's offering.