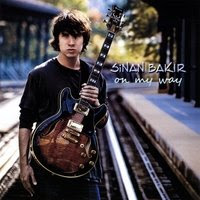 Sinan Bakir is young, but at the same time successful musician and guitarist. He was born and raised in Turkey, but relocate to USA.
Now, he is a active as a musician and part of Connecticut jazz scene, and oftenly he used to perform solo, as a duo, in trio and quartet formation.
"On My Way" is his solo offering, where we can find 11 instrumental themes. Sinan has recorded them with two assistents - bass player Thomson Kneeland, and drummer Mark Ferber. Sinan has introduced himself as a talented author, and his performing views accepts a modern tendencies. His themes were done in one interesting performing mood, where influences comes out from the 50's, and reachs actuelle period.
His guitar technique is in many aspects unique, but offering arrangments has something "taken" from Metheny/Scofield approaches.
His performing energy is also specific, and in interesting way he treats often rhythm changes in present album themes. "On My Way" is highly recomandable product, and realistically announce Sinan' s arrival on modern jazz scene.

Labels: SINAN BAKIR - On My Way