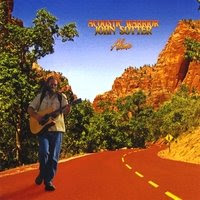 John Sotter is troubadour, world traveller, singer/songwriter, in three words modern acoustic warrior. Till now, he has recorded a 3 studio albums and 1 live CD. He has performed in 24 countries, and he has been also sharing the stage during the years with artists/groups as a : America, Jerry Garcia Band, Eddie Money, Melvin Seals... "Alone" is his actuelle offering, where we can find a little more than 40 minutes of music and 10 mostly equalizing tracks. John's authors views mostly covers insightful lyrical approach, where musical influences mainly comes out from the 70's period.
His threathenings of guitar and harmonica dialogues, knows to remind on Neil Young-uesques method of performings from his earliest stages. His songs also posses a specific mood and unusual emotional statement. "Alone" is a quite pleasent album, with many thrilling places, maybe to close to one general 70's approach, but certainly interesting for acoustic music lovers.