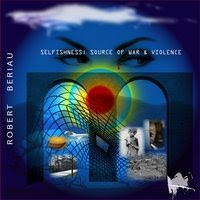 Robert Beriau is unusual person on Canadian independent music scene. He is a business consultant, and also owner of private company since 1996. He is also a well-known national racer hero, he did a 100 races and more than 400 marathons . He was Canadian Master 2
champion in 2007, and he is still active in racing. He is also musican and composer for last 25 years, and also had an experience as a part time FM radio station collaborator. "Selfishness:.... " is his second solo effort, and certainly very recomandable product on newer progressive circuit.This is a seriously released and recorded album, and sort of conceptual work, where basic idea "speaks" about disparities between rich and poor world. Musically, Robert with his collaborators and assistens has offered a sort of ambitious progressive approach nearer to performing conceptuality of Pink Floyd works, from its second part of carrear, and in some aspects comparabile with earliest Van Der Graaf Generator legacies. A many interesting and unususal soundscapes floating through unexpecting arrangments creations, and complete materials from album posses a similiar releasing atmosphere. All other technical aspects satisfies too, and Mr. Beriau surely has introduced himself as important composer and author on nowadays progressive world.