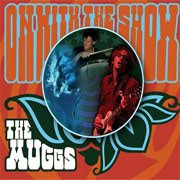 Out of Detroit, Michigan comes a classic rock trio named - The Muggs. They were formed in 2000, but during the years they have received a respectable attention, both from audience and journalists. A band is fronted by key person, guitarist/singer Danny Mathric, and "On With The Show" is their second effort. The Muggs pretty realistically with strongest performing and authors attitudes re-designes 70's period. They sounds as a coherent team, with convinceble performing capabilities. Basically, its approach mainly communicate with the 70's period, and present songs from album posses evident elements of 70's feel and touch. They know to reminds on well-known 70's rock and hard rock acts, mostly from USA theritories, as a Cactus, James Gang, West, Bruce & Laing, but its views also posses a mixing elements of classic blues-rock options, and something from garage psychology too. As a album "On With The Show" deliver pretty enough unexpecting details, also some psychedelic "tricks" balancing through songs. Even of clear retro dimension, which band has reflected through its materials, a Detroit trio also has showed that as a group communicate with nowadays aspects. They deliver a pretty unique energy, and also has introduced themselves as a serious act with promising
forthcoming future.

Labels: THE MUGGS - On With The Show