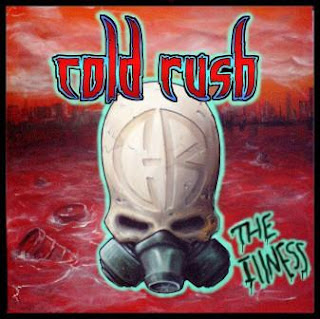 A Munich, Germany based band Cold Rush started its carrear in 2006 with clear intentaion to became a well-known and successful act .
Its line-up are consists of some known musicians with respectable experience behind. Album "The Illness" introduced them as a band who tries to combine electro metal tendencies with goth and darkwave options. They are influenced by the groups as a Die Krupps and Sisters Of Mercy, even that hardly tries to find own way . They have sounded relatively modern, but on the other hand its authors offerings suffers from evidental manniristical problems. A songs are conceptually very similiar among them, and performing realizations were expectingly done. There are 11 tracks on " The Illness" album, duration of little more than 35 minutes.