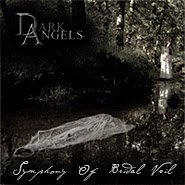 Out of Czech Republic comes a relatively newer outfit, named Dark Angels. They are continiously active on domestic underground metal scene, and firstly introduced themselves with 2 issues from 2005 year - " See You In Hell" and "Postrekov v plameneck " ( live ). They participated too on split CD with Jane Session, and in the final part of 2007 year, they have recorded a still actuelle album, entitled " Symphony Of Bridal Veil".
Dark Angels works as a quintet, and has in its line-up a pretty charming female fronted singer Lucie Avramova. Musically, they have offered a symphonic option of heavy metal with some other additionals as a classic heavy metal and hard rock too. Also some gothic influences are
present here and there. "Symphony Of Bridal Veil" comphrises some interesting authors views of band, even that complete materials didn't posses a same qualities. Also, a production isn' t quite convinceble , and it seems that band didn' t concetrate enough in realizations of each song in identical way.But, a better side of its approach belongs to arrangments offerings, where members from band has showed capabilities to create an interesting performing actions. "Symphony Of Bridal Veil" are consists of 8 tracks with different qualities, but it seems that band has more potentials to offer, than the case was with this album.