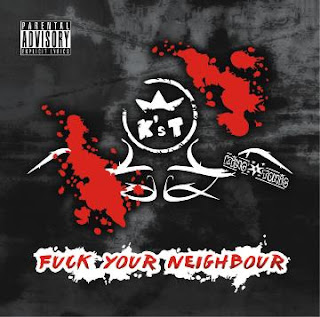 Out of Dortmund, Germany comes act King's Tonic. A band works in quartet formation, and during entire carrear they did a more than 200 shows and festival appearances around the globe. Among others, they had oportunity to perform on three continents, and as a band they visited USA, Russia, China, UK and Sounth East Asia. "Fuck Your Neighbour " actuelle full-length, has introduced them as a explosive, but at the same time pretty melodic band, with clear punk rock musical offering and same attitudes and messages. They are also influental by the USA 90's punk wave, and that's evident after listening a songs from the "Fuck Your Neighbour" album . A mentioned melodic lines makes comparabilities with power pop acts, but its approach also comphrises enough rock traces. Most of present songs posses hitish elements and aspects, and band has performed them with enough ( positive ) energy. Finally, "Fuck Your Neighbour" relevantelly introduced Germans as a promising act with clear vision and quite convinceble attitudes.