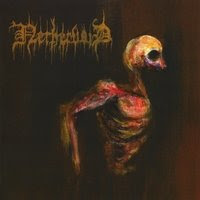 Out of Iowa City, Iowa comes a band Nethervoid. They were formed back in 2004, and during the entire carrear a band has released a one Demo - "Templar Of The Judas Goat" and full-length from previous year - "Sirens Of The Blistering Light" Nethervoid are black metal act, influental equally by the first and the second wave of scandinavian black metal acts. A most influental traces comes out fom Darkthrone and Carpatian Forest kitchen . Nethervoid's sound is rather raw, but with evident atmospheric includings. A weird and temporary symphonic sound with often tempo changes characterize all of 8 present tracks. In some places arrangments posses an unexpecting threathenings.A production is also more orientire to 90's views than to nowadays standards. They delivered some interesting ideas, and I would mentions a closing track "1000 Hands Of The Assiduous Spectre" as a most valuable example.