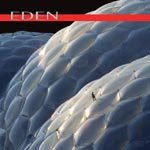 Eden aren't a newer name on Slovenian metal circuit. A nucleus of band had strated carrear in its teenage days, but "real" things had happened after the 2000's. Previously they knowned as a Forgotten Eden, and later on, they shortened its name. Slovenian fellows firstly has recorded a Demo in 2005, entitled "Forgotten Eden". A 3 years later, actuelle "S/t" full length looked the light of day.
A Slovenians works in quintet formation. They have introduced themselves with 10 + 1 bonus track in. Technically, as same as productionally and even maniristically, mostly satisfies, and I would add that all members from band are relativelly well-trained performers.
Their materials are mostly done in melodic hard rock/AOR mood, with also evident 80's hard rock and 70's rock traces as well. In many aspects they knows to remind on Swedish and generally Scandinavian legends as a Europe,Treat or Pretty Maids, but on the other hand, its material unfortunatelly also suffers from less originalities. Maybe, that element nowadys isn' t too important for possible newer followers or fans, but for its further carrear, it is undoubtelly important detail. It's also evident that Eden members did a lotta effort in general album realization, and I will repeat that maniristically its music could be comparabile with approaches of well-known acts. But, a mentioned originality is a real problem for this very moment.