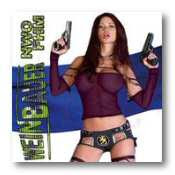 A roots of Finnish band Weinbauer dated back in 1998 year. Some line-up changes passed during the years, but generally band didn' t change its " a little strange" and weird conceptual offerings. Weinbauer surelly enjoy in its performing and lyrical solutions, and its messages reaches also a so call unserious sexual/pornographic variants. But musically, they are faithfull to 80's legacies,
and some influences equally comes out from British and Usa known acts. Also, they have offered
some original authors traces, and each of offering songs from album posses different arrangments threathenings. Weinbauer as a band has accepted hard rock and glam elements, and their sound mainly comphrise one present 80's psychology. "New Wave Of Finnish Heavy Metal" , judging by title, should be a provocative issue, but elements of fun dominetes in general.