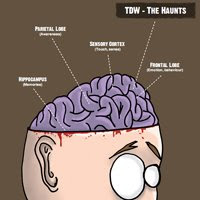 TDW ( Tom De Wit ) is a composer/vocalist/keyboarder from Holland, and he strated his carrear as a author in 2003 year. Till now, he has recorded a 2 albums "First Draft " ( 2004 ), " Up Close And Personal " ( 2006 ) and 1 Single issue. "The Haunts" is his actuelle album from
previous 2008 year. This is a conceptual CD about a guy Juan Jacobson who suffers from specific emotionals stages, and he feels quiet different than other peoples/citisens. Musically, with his assistents De Wit has offered an interesting materials , where progressive symphonic
rock and progressive metal elements balancing between some other alter rock and electro variations. A songs are different among them, and some similiarities in TDW approaches leads to Porcupine Tree, Gentle Giant and even earliest Dream Theater legacies. But, De Wit introduced himself as a talented composer/author, and surelly his actuelle album deserves attention and also a positive reactions.