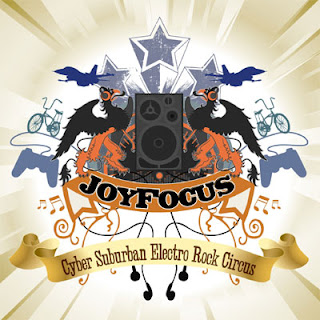 Joyfocus are Wheaton, Illinois based female fronted duo. Holly Joy is a singer, and her husband Rikk Currence is a author and he also plays practically all instruments. On first look, they could be a modern version of Eurythmics, but Joyfocus has offered own musical views.
"Cyber Suburban Electro Rock Circus" is their actuelle and 3rd independently released album, with 9 songs in. All of them, except one are authors work.Joyfocus brings positive energy, they deliver melodic and radio friendly tunes. Some of songs posses insightful threathenings, and christian approach too. Basically, Joyfocus materials accepts elements of modern and power pop traces, but also with the hint of 80's post new wave influences. They also made a hommage to mentioned Eurythmics, covering well-known song "Here Comes The Rain Again". Their songs are pretty listenable and fans of actuelle pop tendencies will be satisfied with Joyfocus offering.