TENTH PLANET - Everything Is Never Over 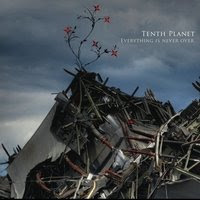 TENTH PLANET - Everything Is Never Over
Written by Branimir Lokner
Monday, 30 March 2009
TENTH PLANET
" Everything Is Never Over "
( Self - released ) 2008.
CD - CANADA
Rock/alter rock/90's/80's rock/pop
Out of Toronto, Ontario Canada, comes band Tenth Planet founded back in the begining of actuelle millenium. The have recorded a debut album " Retro Has No Future" in 2003, and had a sucessfull European tour in 2006. A band works in quartet formation, and during the previous year, they have released an actuelle album, entitled "Everything Is Never Over". Musically, a group has offered one interesting amalgam of rock/alter rock views, based on 90's and 80's rock/pop legacies. We can also find in its offering some influental traces taken form U2, Alice In Chains, and even of Australian band The Church legacies . Their materials are seriously threathed, and group also has offered an intelligent lyrical approach. A production, as same as arrangments were done in modern way. To my taste, even of presence of many valuable moments, its songs suffers of too maniristically threathed details. In "translation", in my opinion maybe a band's materials are too close to one 90's approach and referencies, even of mentioned modernly threathenigs of practically complete technical offerings. But, there's no doubt, that "Everything Is Never Over" is professionally done album, worth listener's attention.
Rating : 7/10
C / o : http://www.tenth-planet.ca/
Posted by Branimir Lokner at 9:28 PM

Labels: TENTH PLANET - Everything Is Never Over