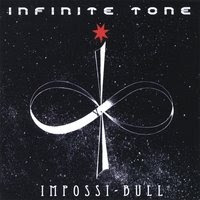 Infinite Tone are Montreal, Quebec, Canada based band, consists of 2 members - Inno Fabbro and Bruno Di Medio. Both of them are in music business in some way from its earliest ages, but generally a real new begining and something quite different belong to its actuell activities.
With 6 additional musicians in following band, they have recorded an album material, entitled "Impossi- Bull".
Infinite Tone in its way tries to create an original music view, based on rock and classic rock elements. For them, a 70's period is main inspiration , but productionally a songs posses standardizations of our time. All of 11 tracks are in some aspects listenable, but without hittish traces. Melodicity is also clear, but without so call stronger symphonic or "orchestral" includings. A mentioned Canadians has threathed offering materials, I would say in one pretty serious way, and its evident after listenings a complete album. As a band, Infinite Tone with its approach could be more valuable for the older listeners, or for the fans who supports a 70's music legacies.