ENDYIUM - Eye Of The Storm 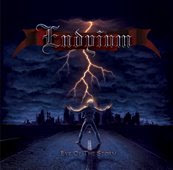 ENDYIUM - Eye Of The Storm

Out of Ottawa, Ontario, Canada comes band Endyium, founded back in 1999 year, firstly as a strictly cover act. Later on, they started to create own materials, and its first discographical step was a Demo, with 3 tracks in. During the previous year, a debut full-length looked the light of day, entitled "Eye Of The Storm".
Endyium works in quartet formation ( momentally without a drummer ), and its line - up are consists of well-trained musicians and performers.
Musically, they cover one maniristacally evident approach, nearer to psychology of New Wave Of British Heavy Metal. Judging also by its performing capabilities , a Canadians has offered own vision, which realization leads to mentioned NWOBHM and golden 80's period.
Their hard rock and heavy metal posses quite enough interesting elements and convinceble attitudes, and productionally, they have captured nowadays tendencies. Even that some similiarities in its performing methods could be comparabile with the styles and approaches of British acts as a : Gaskin, Jaguar or Dark Star, Endyium are band with clear qualities . Technically, also all other details satisfies as well, and I would add finally, that listening of their album was a real pleasure. For all folowers of 80's hard rock and metal, "Eye Of The Storm" is a
real pearl.

Labels: ENDYIUM - Eye Of The Storm