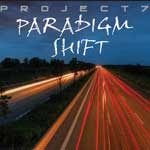 Project 7 is a brainchild of guitarist/composer Dan Begelman, a well-known artist in the world of music. His instrumental works touches a many different fields and genres areas, and Project 7 band is just a one of his products. Till now, a mentioned band was released except actuelle one a two albums - "Lost For Words" and "Birth/Death/Infinity". "Paradigm Shift", actuelle issue, Dan had recorded with his assistents and also skillful performers - drummer Tony Gallino and additional bass player John DeCesare. With Tony Gallino, Dan has spent a 3 full years in the
making a materials for actuelle CD, and as he explains, a "Paradign Shift" comphrises a little different authors creations, than the case was with mentioned 2 previous issues.
"Paradigm Shift" are consists of 9 tracks in, all of them are Dan authors works, except a well-known track - "Theme From An Imaginary Western", penned by legendary bassist Jack Bruce, and also known from the repertoire of USA band Mountain . With his collegues, Dan has
offered an distinctive and eclectic portion of fusion/jazz-rock and rock performings with pretty atmospheric realizations. A present themes were done with colourful arrangments approach and complete album materials posses listenable dimension. Even that Dan and his collaborators
musically draws influences from different decades and areas, and specially from 70's to 90's period, "Paradigm Shift" brings fine realizations, and satisfies in manny aspects.