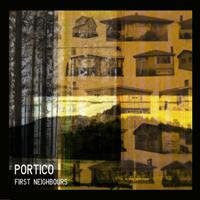 Portico is Vancouver based band, formed back in 2004 year. Their line-up are consists of 2 females and 1 male. During the following period, a group's activities really impressed both domestic/foreighn critics and audience, and practically all of group's albums has received a very positive reactions. They have released with actuelle one, a 3 albums, and toured twice across Canada.
Portico in its specific and unique way blends indie pop/rock elements, traced from the late 80's and early 90's period, but with many original additionals. All of their songs has important and at the same time specific messages, even that lyrical themes finds inspiration in historical or
personal themes. Portico's sound is in the same time as one reviewer explain modest, but also a "big" enough. Their arrangments are different from song to song, and productional work mostly followed a group's emotionaly driven moods. "First Neighbours" comphrises a fine and eclectic materials, with many challenging places.

okay, i NEED this record... i've been scouring the net for it for over 6 months...! Please give me a link?
dyecorduroy@gmail.com