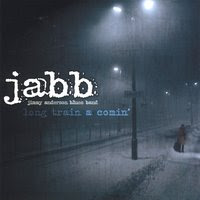 Jimmy Anderson isn' t a new kid in town. He is in the saddle practically 30 years, and as a musician he has explored a many genres fields, from metal to disco. But, as he explains, a blues was always in his heart . With his friends he was formed a Jimmy Anderson Blues Band, and a some period ago, a band has released album entitled "Long Train A Comin' ".
Anderson is a key person in formation, he is guitarist/vocalist/author and with his collegues and assistents he has introduced to audience as a interesting performer. There are 14 tracks on album, some of them were recorded "alive" in few southern venues, others are studio recordings.
Anderson and band are influental mainly by the 80's and 90's sort of blues, and key influences leads to artists as a : Stevie Ray Vaughn, Robert Cray, Budy Guy. But, also in some aspects their offerings could be comparabile with British blues invasion from late 60's and the begining of 70's period, and with the groups/artists as a Chicken Shack or John Mayall from his earliest stages."Long Train A Comin' " mostly comphrises an equalizing materilas without any weacker or less interesting places. If you are somewhere in central Europe during the summertime this year, you can watch them, cos' band will have some concerts in Poland.