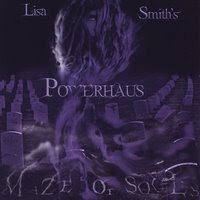 Out of Toronto, Canada comes band Lisa Smith's Powerhaus, formed by two key persons, female singer Lisa Smith, and her partner-in-crime guitarist/author Chuck Page. A mentioned pair had a respectable previous experience and during the years received a same status in
national circuit. Together, they formed a band in 2006, and during the previous year, actuelle album "Maze Of Souls" looked the light of day.
A Canadian pair with their friends and musical assistents has created an equalizing album materials, consists of 11 tracks in.
Their musical and performing option is faithfull to one variant of 70's hard rock and hair metal, and in the other hand also elements of 80's hard rock/metal are presents on its views too. And one thing is also important, and that's a present psychology of mentioned era in rock history, which band has reflected through its messages. Chuck Page is skillful performer, and " Maze Of Souls" also comphrises an excellent arrangments approaches of band. I would also add that all other technical details satisfies, and generally "Maze Of Souls" realistically defines a groups' valuabilities.