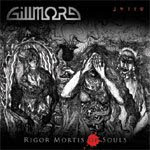 Written by Branimir Lokner
Monday, 30 March 2009
GILLMORE
" Rigor Mortis Of Souls "
( Self - released ) 2008.
EP CD
Heavy/power metal - FINLAND
The activities of Finish band Gillmore dated back in 2005 year. They have suffered of some minor line-up changes, and during the following period , they have recorded a 1 Demo, 1 Single and actuelle EP, from previous 2008 year. "Rigor Mortis Of Souls" introduce them as a band with clear performing and authors ideas.
Their musical offering is something between classic heavy and power metal variants, with some traces in-between, as a stoner rock and melodic hard rock. A melodicity is also an important detail of its songs." Rigor Mortis..." comphrises 5 mainly equalizing tunes, without presence of
unimportant technical offerings, but also without any relevant so call hittish details, or specifically more valuable places.
Rating : 6,5/10
C / o : www.gillmore.fi
www.myspace.com/gillmoreband
Posted by Branimir Lokner at 9:24 PM