AXIOM - A Means to an End 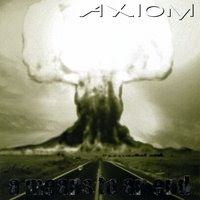 AXIOM - A Means to an End

Axiom are Sacramento, California based band. They started out its carrear at the end of 2002 year and till now they recorded a 7 track EP in 2006 year called "Alpha-Omega", and in the second part of previous 2008 . an actuelle full-length " A Means to an End".
Axiom works in trio formation, and its line-up comphrise a well-trained musicians. I would also add that band really sounds as a team, and its offering album materials is also a well-produced, and generally well-done product. A band musically communicate mainly with progressive metal tendencies, fullfield with different untipical rock idioms. Some comparabilities in its offering leads to the groups as a Metallica from their second stage of carrer, but also Rush or Tool influences are present in Axiom performing and authors views. "A Means to an End" album are consists of 13 equalizing tracks, duration of more than 78 minutes, but at the same time its songs aren' t easy to acceptable on first listening. A band simply needs a special attention, and its materials deserve also a special analyzing mood. Axiom as a band also cover one 90's approach, even that generally they have offered own authors views and authentic performing realizations.

Labels: AXIOM - A Means to an End