THE ELECTROPHONICS - Catch That Swing Train 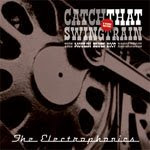 THE ELECTROPHONICS - Catch That Swing Train

During the period of existence Dutch/Belgium act The Electrophonics has received a respectable status on neo-swing/retro and blues therithory.
They have recorded just a 2 albums, a first one entitled "Fells Like Million" ( 2006 ), second and still actuelle "Catch That Swingtrain" ( 2007 ), was a real masterpiece and expands a group's activities. A mentioned album was recorded during the largest blues festival in Holland - "Moulin Blues", and we can find on CD a 13 explosive tracks. A band very easily communicate
with swing, blues, rhythm and blues, neo-rockabilly elements where central figure, a singer and harpist Stephen Hermsen with his uncompromise energy dinamize motorization of performing tunes, creating at the same time a fantastic atmosphere on stage. Colourful arrangments, precise performing duties of all members from band are another details which guarantee a real sastisfiction, if you are a part of crowd in audience , or simply listener of band's CD. Without a doubt, a band did a fine "live " album. As a rumours speaks, a band expects a new album at the first part of 2009 year.