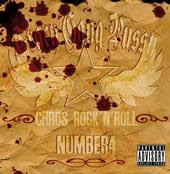 Tracy Gang Pussy - Number 4
Written by Branimir Lokner
Friday, 13 February 2009
TRACY GANG PUSSY
" Number 4 "
( Apcalypse Records ) 2009.
CD-R advanced copy - FRANCE
Sleaze/punk/punk rock/glam/rock
A French band Tracy Gang Pussy is continiously active from 2002 year. Their carrear has a brief history, rich of happenings and events. In their country TGP proudly keep a flame of sleaze rock/punk/glam tendencies, and till now they recorded with actuelle one, a 4 issues. "Number 4" is actuelle album, ready to deliver a band's frantic energy and portion of sleaze/punk/glam tunes. TGP has offered a short but hittish songs, with clear melodic lines and repeateble choruses. A band easily communicate with mentioned genres elements, and even of facts that they has sounded closely to well-established groups as a Swedish Backyard Babies, their album is well-produced, and comphrise a standards of our time. Nothing new if we speak about originality, but at the same time - modern. A band also " create " one optimistic attitude as same as energy, and that's a quite enough for this very moment.
Rating : 7,5/10
C / o : www.myspace.com/tracygangpussy
www.tracygangpussy.com
Posted by Branimir Lokner at 9:22 PM