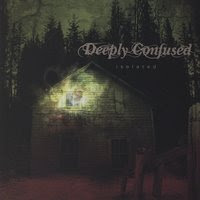 Out of Montreal, Quebec comes band Deeply Confused, founded back in 2005 year. They work in quintet formation. Firstly, they have released a 3 track Demo in 2006 year, and during the previous 2008 year, still actuelle EP with 7 tracks in, entitled "Isolated".
Canadians are on the field of melodic and technical death metal fullfield with some thrash includings and also with hint of classic metal tendencies as well.
Their approach also apsorbs some symphonic and darkwave elements too . A group is clearly influental by the 90's period, a some reviewers compares them with late DEATH legacies, but I would say that generally band accepts 90's influences as a leading inspiration.
"Isolated" is a well-produced and also modernly threathed EP, with well-done other technical includings as a CD cover design too. I didn' t find too much originalities in its authors offering, but in the other hand their performings skillness posses enough passionates and positive energy.